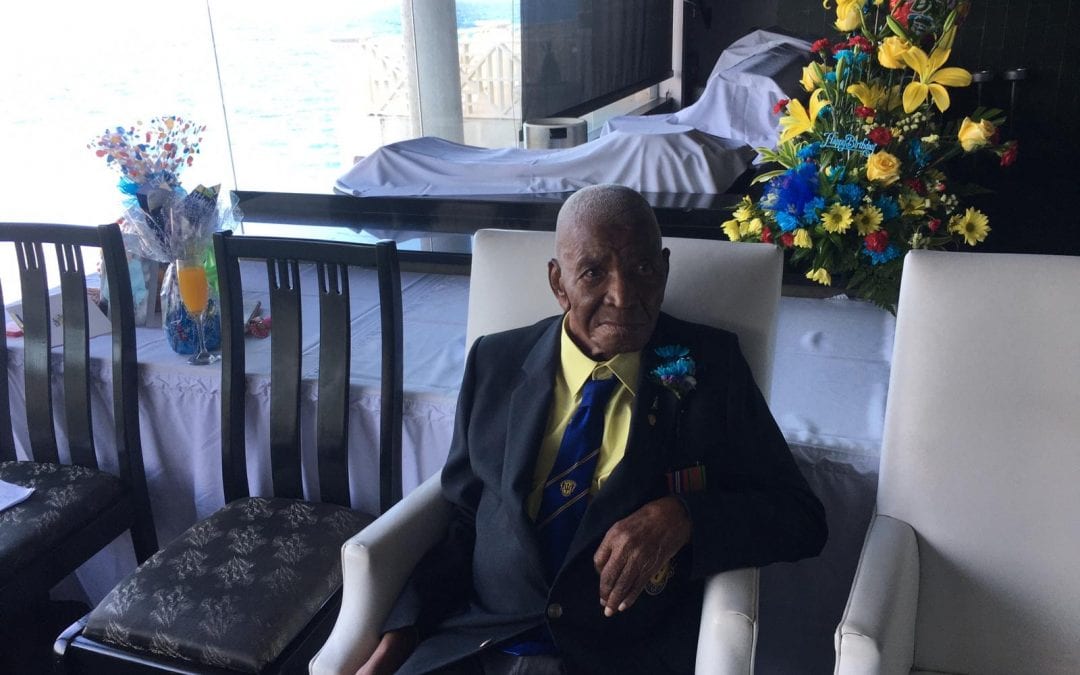 Clarence Linton Murrell was a strict disciplinarian and a stickler for good time management in the work place.

These attributes aptly sum up the character of the man, as Governor General Dame Sandra Mason joined family, friends and members of the Barbados Legion, in his 100th birthday celebrations at Zen Restaurant, Crane Beach Resort, St. Philip, on Tuesday, November 12.

Clarence was born in Glebe Land, St. George but grew up in Parish Land in the same parish where he lived with his father Clarence Lynton Bellamy and grandmother Millicent Aimes.

Educated at the St. George Boys’ School, he worked as a Supervisor at the then Ministry of Communication and Works.  Later, he joined the Royal Airforce as an Aircraft Operator based in Trinidad.  He fought in World War II, 1939-1945.

Granddaughter, Kathryn Alexis in a tribute, said her grandfather had influenced the lives of generations of his family and had “stood as a beacon of inspiration always embodying the human values of love, hard work and steadfastness”.

She said at an early age, her granddad, the eldest of his siblings, assumed the role of caretaker.  In this role, he learnt the value of hard work from watching his father working tirelessly in the agricultural sector.

Her fondest memories of him while visiting Barbados with her sister, was watching him working in the garden at home and taking them for ice cream and visiting other relatives in other parts of the island.

“It was on these visits to people like Auntie Glorrie, Sissy, Uncle Clyde and Uncle Earl, that I witnessed my grandfather’s extreme love for his family.  I felt proud to get to know our relatives and hear their stories – stories that created a loving tapestry of experiences, trials, triumphs and love for each other.”

Daughter Heather Lewis, who spoke on behalf of herself and her three siblings fondly reflected on her father’s disciplinary tactics (not answering back when being spoken to, not allowing them to go to the beach by themselves, among other things) which she said “served them in good stead”.

As a supervisor, she recalled the many stories from his former charges about the high level of discipline he brought to the job. “To his day, many people who worked under you remember X 547 and when it was approaching the depot the word went out  ‘Murrell coming fellas and you know he don’t stand for any foolishness back to work’ and they thought he didn’t know.”

Dame Sandra said it was people like Clarence who have made Barbados what it is today and thanked him for what he did for the country.