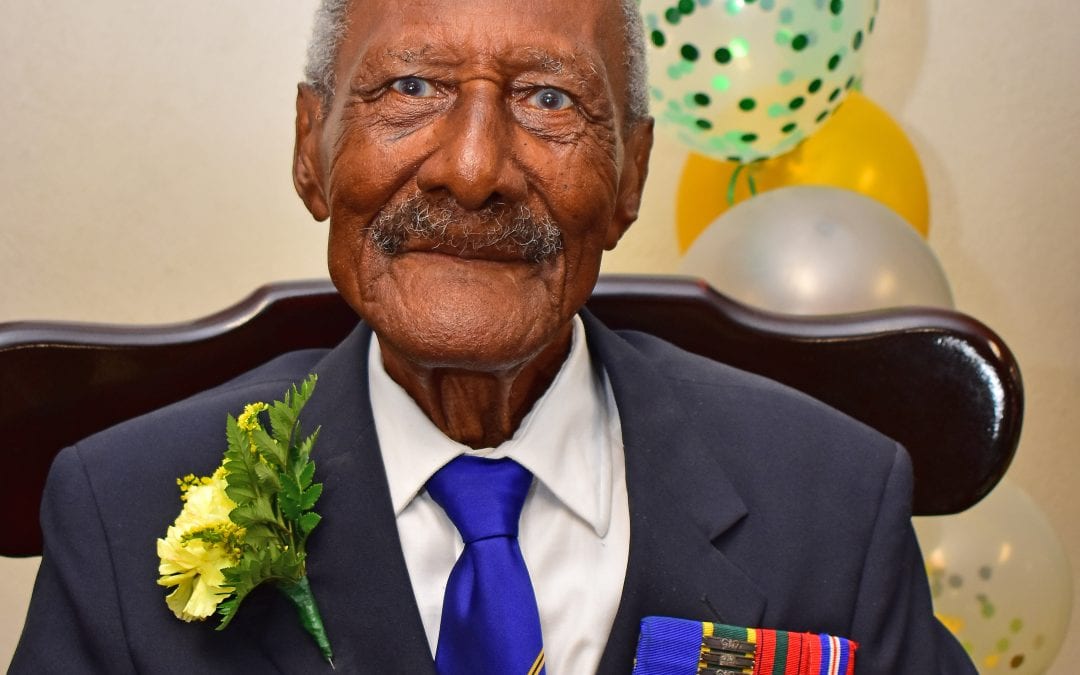 Warrant Officer II Elder Bishop was a decorated soldier whose commanding presence, dedication and loyalty to duty and country endeared him to junior and senior officers.

For his recent birthday celebrations in the Warrant Officers’ Mess, at St. Ann’s Fort, The Garrison, St. Michael, Governor General Dame Sandra Mason was the guest of honour, and several present and retired officers were present.

Fabian Bishop, who spoke on the family’s behalf, said his father was born in 1st Avenue Bank Hall, St. Michael, and educated at the Roebuck Moravian Boys’ School, where he remained until the age of 12.  At age 16, he enrolled in the St. Michael Cathedral’s Boys’ Scout Troop, and then later the Young Men’s Christian Association Boys’ Scouts.

While serving as a scout, he earned a living as a shoemaker repairing boots for members of the Barbados Regiment, and for a few retail stores in Bridgetown.  In 1937, at the age of 18, Warrant Officer II Bishop joined the Barbados Volunteer Force.

Two years later, he became a full-time soldier, when Britain declared war on Germany on September 12, 1939.  At the end of the war in 1945, he rose to the rank of Warrant Substantial Corporal.

In 1946, he migrated to Bermuda and spent five years and three months working at the British Dock Yard Naval Facility.  Elder Bishop returned to Barbados in 1951.

Fabian said his father, on his return, “immersed himself with the duties of the Barbados Regiment” as a soldier, where he received many awards and commendations for his dedication to duty.

These awards include the Youth Warrant Officer Award in 1973; the Major H.F. Pinder Cup on October 31, 1974; the Royal Leicestershire First Team Award on December 4; the1974 Lei Team Award; and the Gaden Cup on December 7, 1974.

Warrant Officer II Bishop retired from active service in 1991, and was presented with a plaque for his 39 years of outstanding service

Fabian summed up his father’s military career this way: “When I hear these two words – loyalty and dedication – these are two attributes that identify who my father really is.  This is a man that has given all of his years and made many sacrifices to the service of the Barbados Regiment.”

He continued: “On July 4, 1954, he was on the parade square and he was given a note that his first born was on the way…he stood his ground.  Lightning struck twice again because seven years later, on July 10, 1961, while he was receiving an award from the first Governor-General of Barbados, Sir John Stow, he got a message again, Bish, your second child is making its way.  He stood his ground again and he said to family and friends, God has given me two medals today, the medal I received earlier from Sir John Stow and the medal my wife has given me, a son.”

Elder was married to Maria and had two children.  They also had five grandchildren and six great grandchildren.

During the proceedings, Elder Bishop unveiled a plaque to officially rename the bar, the Elder Edward Bishop Lounge.