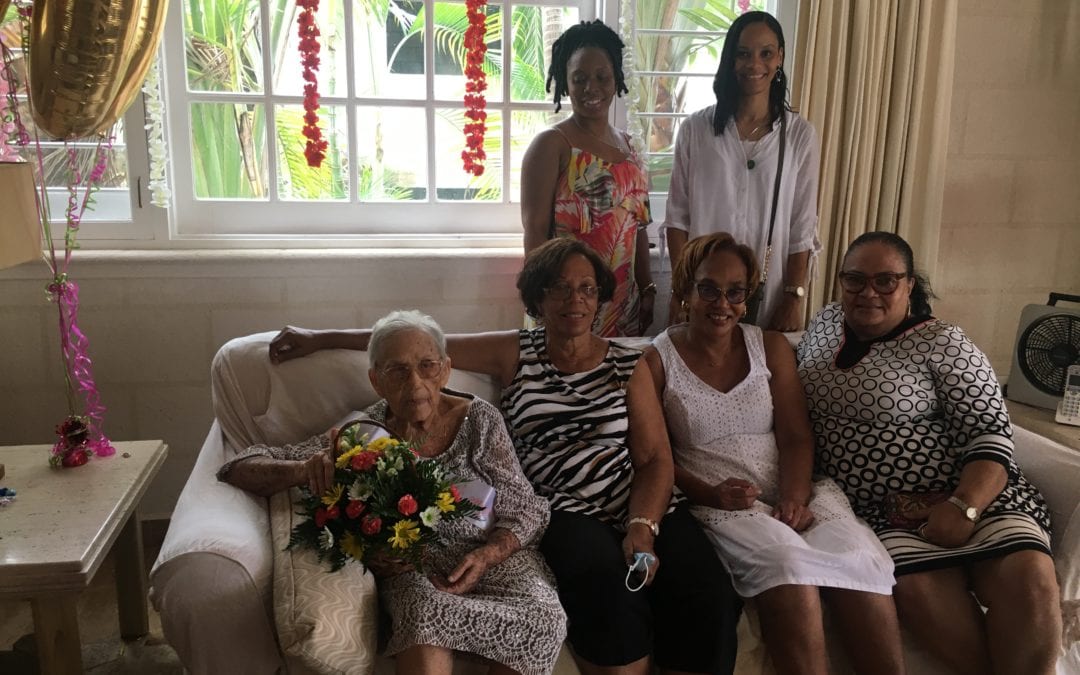 Elsie Carrington had a sharp wit that belied her 100 years and was not afraid to speak frankly on any subject.

On Sunday, September, 27, 2020 Elsie was the “lady of the hour” as Governor General Dame Sandra Mason, via Skype, joined relatives in the celebrations at No. 57, Hoyte’s Terrace, St. James.

A grateful Elsie spoke about her great love for her family and late husband Stanley, affectionately called “the Bossman”, describing him as “sharp and looking hot” as she caressed his photograph in the family album.

She added: “It feels wonderful that the Lord help me to live to see a 100 years.  I am thankful because I could not be here without him helping me…I am not in the hospital lying down and I enjoy myself, I am not suffering and all that I need the Lord provides for me.”

In younger days, Elsie was educated at Gill’s Memorial School, a short distance from where she grew up in Halls Road, St. Michael.  Later, she moved to Bay Estate House, Upper Beckles Road, with her husband and their six children in 1955.

She worked for Cave Shepherd and Company Limited and Forgarty’s making wedding veils, bridal floral arrangements and other wedding paraphernalia.  When she became a mother, Elsie was a stay-at-home mom while Stanley, then employed at the National Housing Corporation, supported his family.

A strict disciplinarian, Elsie was still a “stickler” for persons being presentable and displaying good manners.

A devout worshipper at Ebenezer Gospel Hall, on Crumpton Street, she was the oldest and longest member of the church and received a bouquet from the pastor and members of the church.

Elsie had a hearty appetite and enjoyed steam pudding, stuffing, sweet potato, yam and the occasional piece of fried chicken.

She enjoyed watching television and listening to the call-in programme.