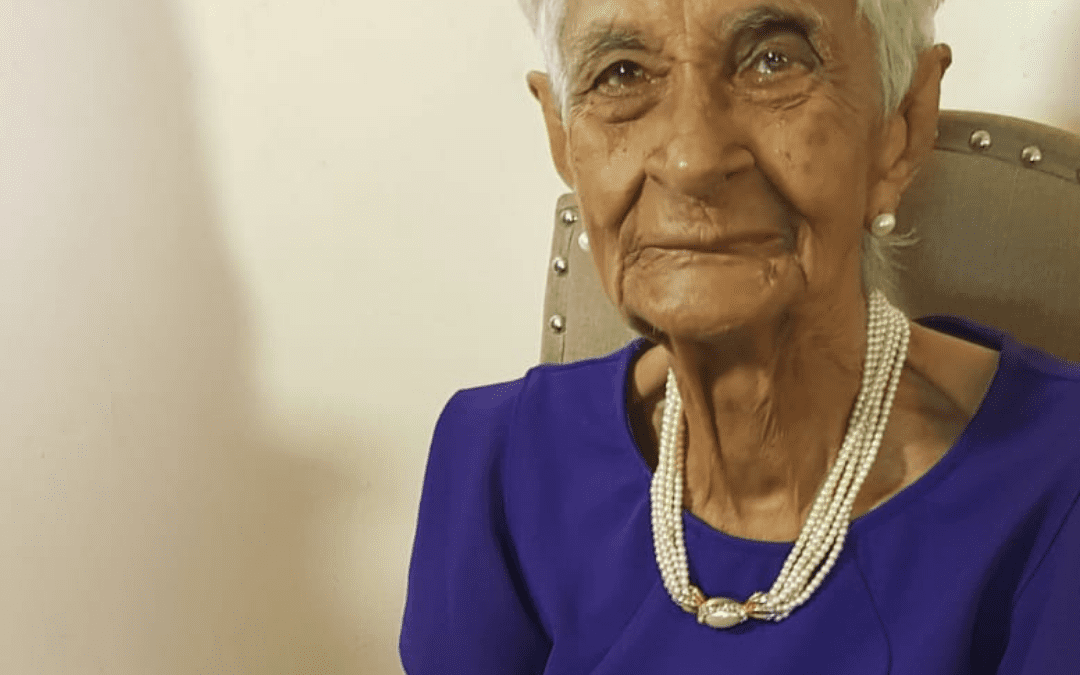 Eunice Phillips can be considered a pillar of her Glebe Land, St. George district. In fact, the Golda Phillips Walkway, named in her honour, is testament to how well-loved she is by neighbours and friends in the community.

Golda, as she is affectionately called, never left Glebe Land, and many can attest to the valuable advice she imparted to them over the years.

Educated at Rudder’s Academy and St. George’s School, Golda entered the classroom as a teacher at South District Primary School, where she helped to shape the lives of some of the nation’s children.

She later took up a position at the assembly line at the former British American Tobacco Company.

While at British American Tobacco, Golda met and later wed Luther Phillips, now deceased, and had four children.  The couple also had 10 grandchildren and 11 great grandchildren.

For recreation, Golda loved to dance as a means of remaining “slim and trim”.  She fondly recalled the first time she danced.  “When I was young, I liked to go to dances.  The first dance was when I was four years old.  There was a man from St. Philip who married a neighbor of mine and they would say come over and play.   They put me in the centre and said there’s a brown girl in the ring and I dancing.  So, I must be dance from then until now.”

A devout worshipper at St. George’s Parish Church, Golda was a member of the Church Army, the Mother’s Union and the choir.

Cathy-Ann Brathwaite, her granddaughter, described her as someone who always knew what she wanted in life and worked towards achieving it.  “She wanted a house, a husband and children.”

She said her grandmother was full of insight, and imparted financial and relationship advice, some of which she listened to, but conceded that it was always on point.

“Golda, you always have been and will continue to be an inspiration to us, your family and to all who know you.  You have a firm belief in God and also in the fact that if you are good to others, good will befall you,” Cathy-Ann noted.

Cathy-Ann said Golda was a font of historical facts, and recalls when they “shut up” [homes and businesses] when the 1937 riots occurred.  She also has an excellent recall of family history.

She has a hearty appetite and her favourite meal is cou cou.  In fact, Golda boasts of teaching many to cook the popular Barbadian dish.

Golda explained: “You sieve the meal; boil the okras; you strain the okra water and start stirring the meal in that kind of water – up, down, across…”

Her favourite scripture verse is: “Blessed are the pure in heart for they shall see God”. She added: “The secret of the Lord is theirs; their soul is Christ the Lord.

She advised the youth to: “Obey God’s commandments; walk in his footsteps; live in peace with others; go to church and read the bible every day.”