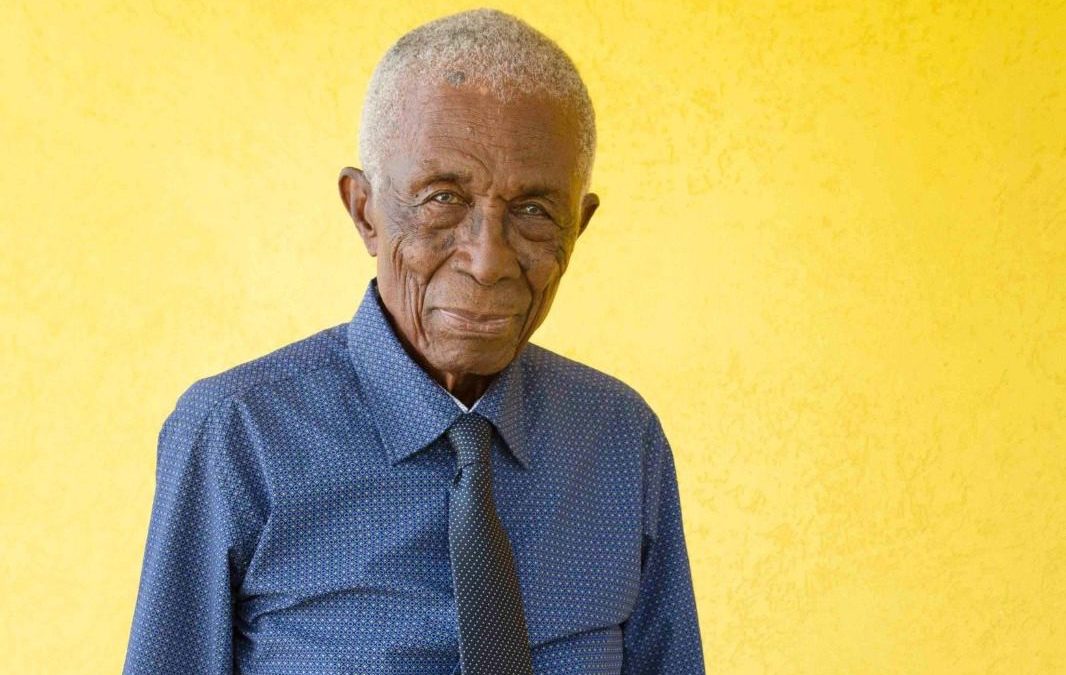 Fitzgerald Brereton is a living testimony of an active senior.  At the age of 100, he still drives, takes leisurely strolls around his neighbourhood at Cottage Heights, Fairview, St. George, and still attends service at St. Luke’s Anglican Church.

On the eve of his significant milestone, last Friday, January 7, many watched as the jovial senior renewed his Driver’s Licence.

The following day, Saturday, January 8, during a virtual visit via Zoom with the President of Barbados, the Most Honourable Dame Sandra Mason, the affable centenarian told Dame Sandra one of the things he planned to do was to drive to State House to celebrate her birthday on Monday, January 17, “whether she had invited me or not”.

Mr. Brereton, surrounded by his adoring relatives, received a personal invitation from Dame Sandra, along with a card, and other gifts.

Dame Sandra extended best wishes on his 100th birthday and expressed the hope that he enjoyed many more birthdays.

The devout Christian attributed his long life to God, adding that persons should “think about the master and don’t behave like Satan”.

The centenarian remarked that he was grateful for life and would continue to enjoy it, pointing out that there were some younger than him just lying there unable to say a word, and declared that he was praising God that he could still move around and his faculties were still intact.

Sister Enid, who joined from Montreal, Canada, reflected on growing up with Fitz, who assumed the tough role of “father” with the early death of their biological father.

She shared: “He was a very demanding person and when he corrected me, he gave me a good beating.  Happy birthday and I always think that you will live like Uncle Doc [Supercentenarian James Sisnett who died at 113]; you have 13 more years to go.”

Educated at St. Luke’s Boys’ School to seventh standard, Mr. Brereton was a key member in the credit union movement in its genesis. He was also involved in charity work with physically handicapped children, for which he received a Barbados Service Medal.

He married his sweetheart Lilian at age 21 and that union produced nine children, six grandchildren and two great-grandchildren.

A former electrician, Mr. Brereton worked at Emtage Electrical; the defunct Barbados Foundry; and at Mount Gay Distilleries, where he remained until retirement at the age of 70. Longevity runs through the family’s veins.  He recalled that his mother passed away at age 99, his aunt at 103 and his uncle, the beloved Super Centenarian James Sisnett, died at 113.  Another relative is also on the cusp of reaching the significant milestone