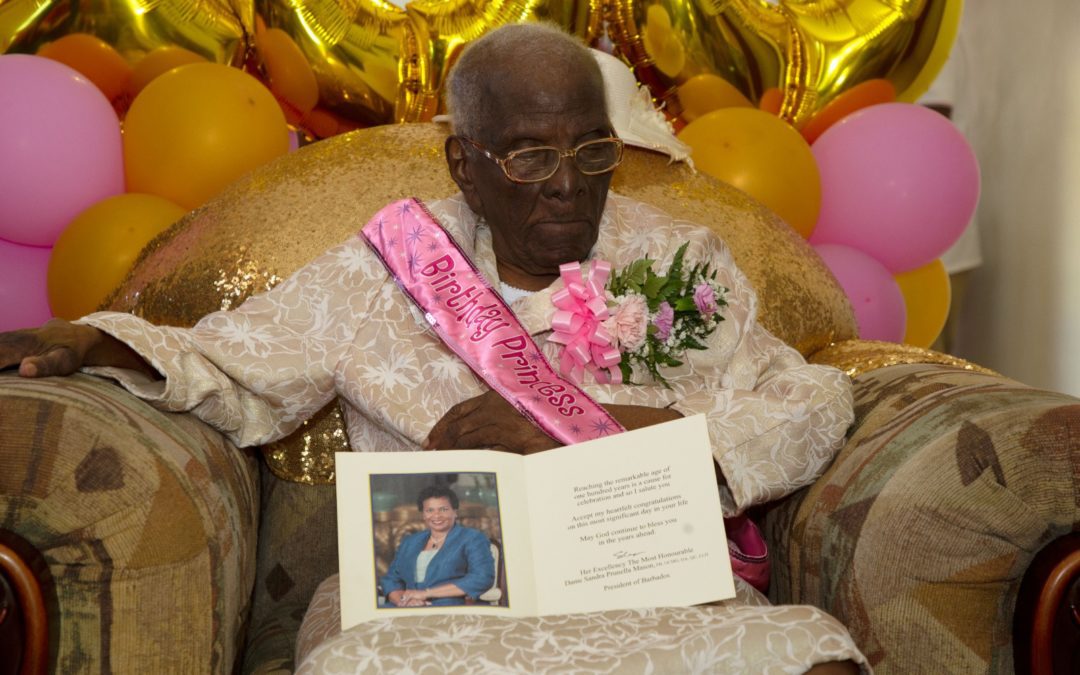 Gwendolyn Anita Moore was the center of attention on Saturday, January 1, when family members “raised their glasses” and toasted the island’s first centenarian for 2022.

Ms. Moore was the first to receive a virtual visit by President of Barbados, The Most Honourable Dame Sandra Mason.  Dame Sandra extended New Year and birthday greetings to the affable centenarian during the celebrations at her Hinds Hill, Cave Hill, St. Michael residence.

Caretaker and granddaughter, Jacqueline Hunte, shared that her grandmother had raised her from three months old, and reminisced: “I was always living with mom and that was a good thing for me because I looked to her as my mom.  She did so much for me.  She raised me; she raised most of her grands after she raised her five boys, and she did a wonderful job.”

“She continued: “I remember growing up with mom, and every morning before we went to school, she would wake us up at 5:00, and we would go to her room to do devotions – reading the bible – while she would pray for us.  As we grew up, she took us to church and that helped to build a foundation for us to be good citizens.”

Jacqueline said although her grandmother was a strict disciplinarian after God she was her “rock from three months old until now”, and thanked her for all that she had done.

Ms. Moore’s brother, Ernest Ward, said his older sister used to plait his hair for school; bring lunch for her two brothers at school every day, and help with their homework.

Other relatives also praised Gwendolyn, a former Sunday School teacher at Mount Hermon Church, for her strong belief in God and her kindness to all with whom she came into contact.