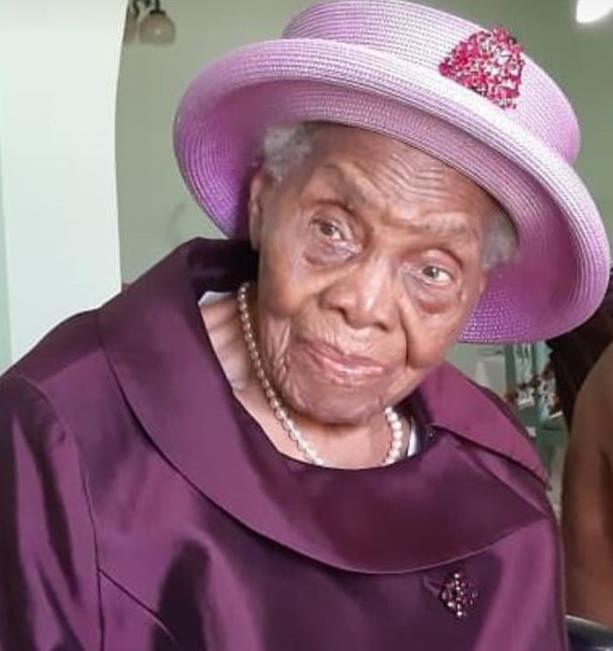 Educated at St. Luke’s and St. David’s Schools, she married Leon “Bong” Belle and that union produced 10 children, one deceased.  They also had 20 grandchildren, 20 greatgrandchildren and 12 great-great grandchildren.

A devout Christian, she was a member of Ellerton Pentecostal Church for several years and then later Evangel Temple now called The People’s Cathedral where she has been a member for the past 60 years.

She served as a Church Captain and was responsible for contacting persons to ensure that they were attending church regularly, mentoring them in the faith and helping them to develop in their Christian walk.

One of her granddaughters, Nicole Alleyne, fondly recalls that gran as she is affectionately called, is an excellent cook, a skill which she has passed on to her children and them in turn to their children.

She added: “The first memory takes me back to the time when she baked homemade whole wheat bread on Saturdays. I can still see gran taking those tiny balls of yeast from the tin as she prepared to make the dough and then leaving the dough on the kitchen counter under a damp towel to rise. Eating a thick slice of that warm bread with butter melting on it was the ultimate moment of satisfaction. I have never tasted bread like it since.”

Nicole also recalled her grandmother’s making pudding (fruit cake) and her cousin and other grandchildren “hanging around the kitchen at that time was to lick the legs of the mixer and the bowl after Gran had finished mixing up the pudding”.

“And guess what? We never got sick from salmonella poisoning or anything of the sort,” she added.

Hestina also baked a “potent black cake” – a process which began months in advance with the minced fruits in a glass jar soaking in port wine, falernum and rum.

She is known for using phrases such as “becausing, and telling you”.  But the one which resonates most with her relatives is “the cat does watch the queen” when they were curious as to why she stared at them for long periods.

Gran didn’t watch much television, but she enjoyed watching wrestling, especially matches with Invader Nos. 1, 2 and 3.

Nicole recalled neighbour Ms. Brathwaite’s regular visit to the house to watch wrestling matches with gran. “They laughed from the beginning to the end of the programme, that was their weekly past time.

Apart from her baking skills, gran was also good at needlecraft.