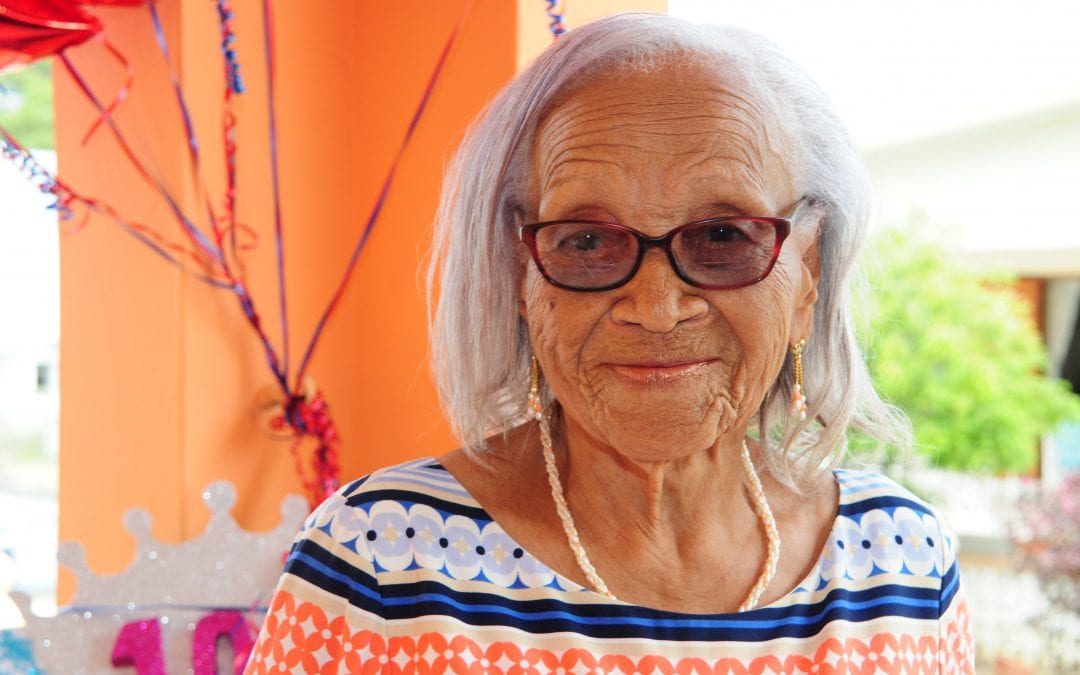 Icilma Marsh is still a fitness enthusiast at 101 years old.  She goes to the Surfside Wellness Centre three times a week and is the darling of other gym enthusiasts who marvel at her still pedalling on the circuit bike.

Born in Carters, St. John, Icilma attended the St. John’s and Mount Tabor Schools.   On leaving school, she worked as a clerk at Rollins Fabric Store and then later at Griffith’s Fabric Store which were located in Swan Street.

At 17 years old, a youthful Icilma left the warm climate of Barbados for the chill of London, England, where she worked as a dressmaker in a department store.  While there, she met and later wed her husband Samuel Marsh, now deceased, who was working in the office in the same department store.

The couple had no children but Mrs. Marsh has two from a previous relationship.  She also has seven grandchildren and three great-grandchildren.

Prior to relocating to England, Icilma worshipped at St. John’s Parish Church.  On her return several years later to the island, she settled at Ashdeane Village, Black Rock, St. Michael, where she still resides, attending St. Stephen’s Anglican Church,

Icilma fondly recalled her days of going to dances by the Drill Hall, St. Michael.  “I loved to dance and although my mother insisted that I had to go to church, she would say that I had to be back home by midnight to make sure that I combed my hair for church early the next morning.”

She continued: “In those days, most people had to wait until they got paid to go to dances but not me; I made sure that I put aside my money to go to dancing and enjoy myself.”

While at Surfside, Icilma was full of praise for her trainer Anita Husbands.  Describing her as “absolutely wonderful”, she praised Anita for carrying her through her routines of stretching and other warm up exercises. She is also Icilma’s trainer when she is on the circuit bike.

A health aficionado at heart, Icilma’s breakfast before going to the gym consists of: shredded wheat sweetened with honey and topped with wheat germ, a soft boiled egg, toast and a cup of tea.

For lunch, Icilma enjoys rice and peas, kidney bean soup with mutton or any other dish.

She also goes to the nail salon to have her nails done to ensure that when she steps out everything is “on point.”