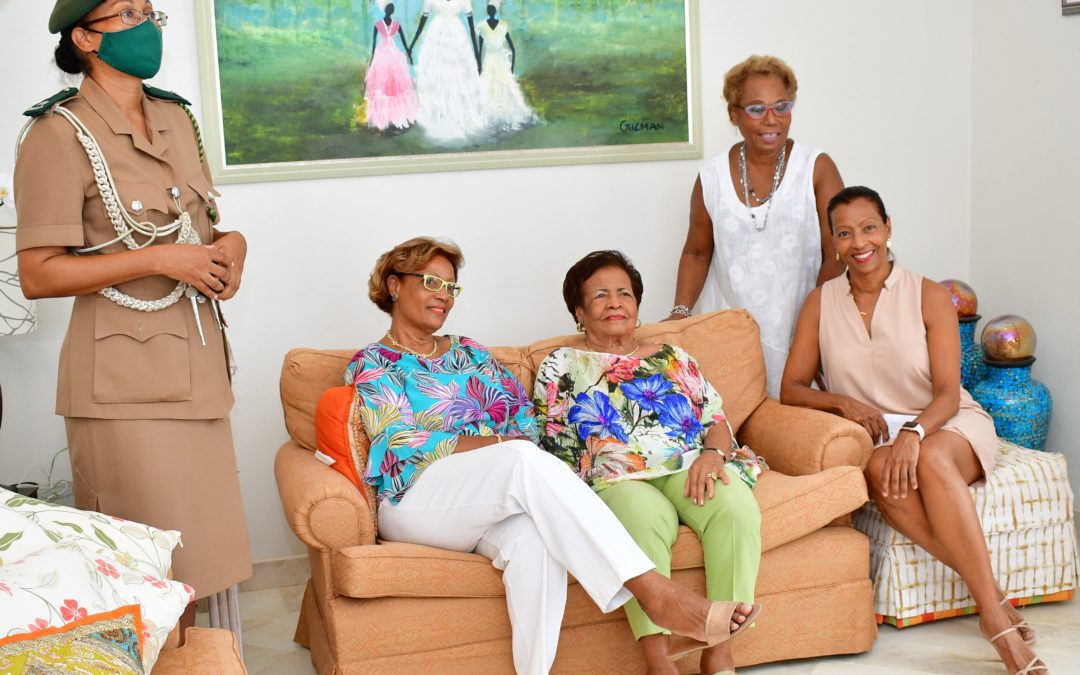 Iyola Parris is a “Trini to de bone”, and enjoys all things Trinidadian.  In her younger days, she enjoyed a good party and the day was not complete unless she listened to her favourite calypsonian, the Mighty Sparrow.

The centenarian, whose youthful looks belie her 100 years, recounted her life story to Governor General Dame Sandra Mason, who virtually joined relatives in toasting Mrs. Parris during birthday celebrations at the home of her daughter, Carolyn Boyce, at Atlantic Shores, Christ Church.

The Governor General’s Aide-de-Camp, Major Julia Dabreo, presented a basket of flowers, non-alcoholic wine and a birthday card on her behalf.

Dame Sandra extended best wishes to Mrs. Parris, and when asked how she was feeling, the birthday girl replied “I am feeling like I am 21-years-old”, much to the delight of family members.

Daughters Jacqueline Granderson and Carolyn described their mother as a “social being”.  “Mummy likes a good party; she loves to fete; she likes calypso.  She loves a little drink and she loves to have people around.  We grew up in a household that was full of people all the time….  All her friends and all our friends were always there and the party was always just a minute away.

Her only granddaughter Lesley Granderson recalled her grandmother’s tasty hand cut fries, “amazing curry”, tasty Trini dishes, fish cakes and bakes, while Carolyn remembered the buss up shuts and rotis made by her mother.

Born in Arima, and later residing at No.12 Kitchener Street and Woodbrook Port of Spain, Mrs. Parris attended Roman Catholic Schools and then later the Secretarial School.

While living in Trinidad, Iyola worked as a Bookkeeper/Accounts Clerk with J.T Johnson.  She emigrated to Barbados in 1953 and worked in a similar capacity for Alleyne Arthur and Company Limited.  Mrs. Parris and her husband Leslie raised their family in Brighton, Black Rock, and at Waterhall House, Eagle Hall, St. Michael.

Iyola said she was sorry that her husband was not around to celebrate the milestone with her, but nonetheless, gave God thanks for her long life.

Mrs. Parris comes from a family of long livers.  Her sister Pearl Jackman, died two years ago at age 100, and her brother, Carl Prudent, is 91 years old.

The centenarian enjoys playing Solitaire on the iPad; was an avid Bridge player until last year, and is a former member of the Barbados Bridge League, and the Lion’s Club.

Among her favourite foods are shrimp, ice cream and assorted desserts.