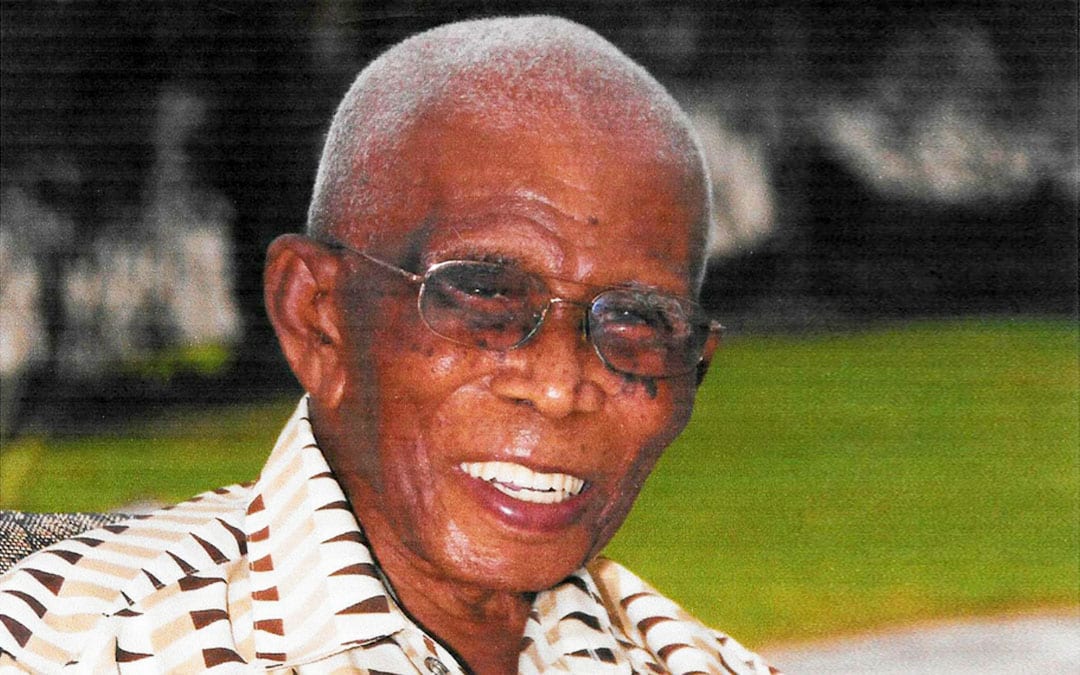 James Emmanuel Sisnett, BCH had a deep love for agriculture.

Born at Drax Hall, St. George, James was educated at St. Luke’s Boys’ School.  After leaving school, he commenced training for his career as a blacksmith and later as a mechanical engineer, as they were then called, at the former New Castle Factory in St. John and the Barbados Foundry, in Bridgetown. After a three year apprenticeship at the Foundry, he secured his first job at Haynesfield Sugar Factory, St. John, later renamed Wakefield Factory.

On leaving Wakefield Factory in 1920, the young Sisnett joined the staff at the Barbados Foundry where he improved his skills and worked for three dollars a week.  A year later, he secured a job at Kendal Sugar and Syrup Factory as a Blacksmith.  Through his ingenuity, commitment and dedication, James rose to the level of chief factory engineer and foreman.  He remained at Kendal until his retirement in 1970.

He often shared stories with his children, grandchildren and relatives about the manufacture of sugar and cane syrup.  He pointed out that the yield of sugar per ton depended on the variety of sugar canes and the area of the country in which the sugar canes were grown since rainfall was also a major factor.  He also explained the various processes from juice extraction to sugar crystallisation.

He married his sweetheart from school days, Neta Tamara Dowling on December 23, 1923.  That union produced five children.  Sadly, Neta died 14 years after they were married, being buried on July 23, 1937.

It appeared that the number 23 may have had some significance for Sisnett because on May 23, 1942, he married Josephine Evelyn. This second marriage produced six children.

In his heyday in agriculture, James cultivated various plots of land which he owned by planting vegetables and sugar cane.  He was also into dairy farming and was one of the earlier suppliers of milk to the then Polar Factory which was located on Marhill Street.

He was also one of the early suppliers of milk to the Pine Hill Dairy and was a shareholder in the Dairy until his death.

Mr. Sisnett, along with some of his relatives and friends founded the Ellerton Marketing Society and bought a small tractor which was hired for a small fee to farmers who had difficulty in getting small plots cultivated to plough their land. They were also founding members of the Ellerton Cooperative Credit Union.

In 1990, James was honoured by the Ministry of Agriculture as the country’s oldest farmer.

The crowning moment of his life was in 2000, when he was awarded the Barbados Centennial Honour for his contribution to agriculture. He wore that insignia proudly on formal occasions.

In 2011, he was presented with an Ice Trophy by the Government for becoming this nation’s first super centenarian.  He was also recognised as one of the heroes of St. George by the St. George Parish Committee with the permanent mounting of his photograph at Salters.  In 2012, he was taken to Ellerton to see the road leading to his home renamed the James Sisnett Road.

A devout Anglican, James attended St. Luke’s Anglican Church and was a member of the St. Luke’s Parochial Council.  He was a founding member of St. Luke’s Men’s Fellowship and served as its first treasurer.  He was also the church’s treasurer for many years.  He was an active member of the Church Army and never missed an activity.

James enjoyed reading the Bible and the newspaper.  So when his vision deteriorated in 2006 to the extent that he could no longer do both of these things, he decided to have the cataracts removed.  In 2007, at the age of 107, he had cataract surgery on both eyes and was delighted to be able to read again.

Remember the number 23 which appeared to have had some significance in Sisnett’s life? Barbados’ only documented super centenarian, James Emmanuel Sisnett died on May 23, 2013.  A the age of 113, he was the oldest man alive in the western hemisphere and the second oldest man in the world, he was believed to be the last surviving black man born in the 19th Century.  He remained in relatively good health up until the time of his death.