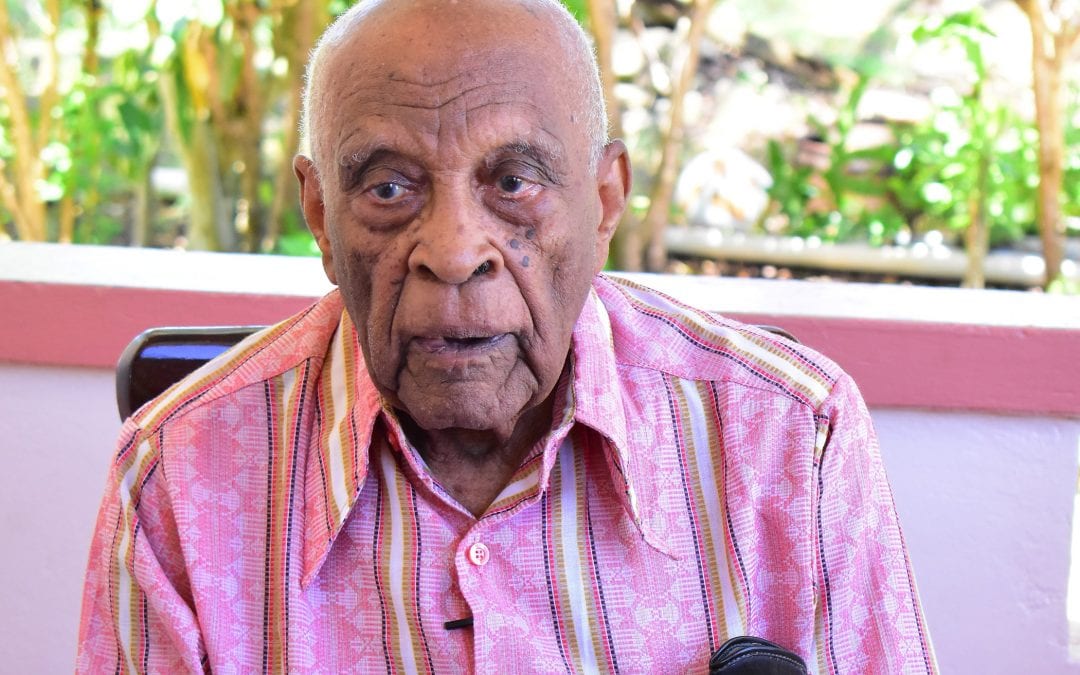 John Foster made a name for himself as one of this island’s Chief Sanitary Public Health Inspectors.

Born in Belleplaine, St. Andrew, John was educated at St. Andrew’s Boys’ School, the Alleyne School and Harrison College; He worked as an apprentice druggist before a chance conversation with a friend led to a rewarding 40 year career in the public health inspectorate.

His career began at age 20 and John worked his way through the ranks to become Chief Inspector in St. Andrew and then later in St. Michael.  According to him, becoming the Chief Inspector for St. Michael was a big accomplishment in those days because one was now considered a “big shot”.

John recounted: “I was home one day and a young man who was working in St. Andrew came by and said John we want help.  Why don’t you come?  I agreed and I went ahead and started.  The salary was $20 a month and I could do more with $20 then than you can do with $50 today,” he said with a chuckle.

The affable centenarian, who now resides in Small Town, St. John, spoke candidly about changes to the profession over time.  “In those days, we were only looked upon to see that the premises were well kept, there were no inspections to food shops and hotels that only came into effect in 1948,” he noted.

Married to his sweetheart Waple, now deceased for 56 years, John recalled how they met and fell in love and eventually got married.  “She [Waple] was a nurse and one of my sisters was also a nurse at the Baby League and I had to take a change of clothes for my sister.  On this day, she had a little time and we were chatting.  The Sister saw her and shouted at her.  The next time I saw her, I asked what the Sister wanted and she said ‘to get me away from you’, but that didn’t separate us,” he reminisced.

John revealed that his late wife had an “eye for him” from age 13 when he was a school boy but it wasn’t until the age of 23 when their paths crossed.  They got married when John was 37 and Waple was 30.  They had five sons, five grandchildren and ten great-great grandchildren.

“She was an extremely kind lady.  Even if someone walk off the street and said they were hungry, she made sure that they had something to use.  In fact, I think that she was too kind and I miss her very much,” John said fondly.

John is from a family of political titans.  In fact, his father Darry Foster was the first black to serve in the Vestry of St. Andrew and his sister, Dame Edna Bourne, was a representative of St. Andrew in the House of Assembly.  His brothers, David and Richard Foster, also served in the Vestry.

He related that on his father’s return from the Panama Canal, he became a shopkeeper who later entered politics and succeeded.  In his role, the elder Foster ensured that the poor received a 36 cents a week allowance and that the sick in Almshouses were looked after.

He recalled that at the death of his father, the then Barbados Labour Party selected Mr. Worrell as the candidate to replace him.  When called upon to address the crowd during the meeting, Mr. Worrell had “cold feet.”

An eager Dame Edna, his sister, then stepped up and talked to the crowd with gusto and confidence.  Following her speech, Dame Edna became the candidate for St. Andrew.

Considered as being of a priviledged family because of political and business ties, John Foster has lived through several important events, including the 1937 Riots, and Barbados’ Independence.

John attended St. Andrew Parish Church and spends his days as “a professional idler” which he explained meant “doing everything and doing nothing.”

He believes that today’s youth need more discipline and he encouraged parents to take greater charge in this regard.

John is still a very active senior with no major ailments and spends his days quietly chatting with friends or driving around with relatives.

Among his favourite foods are fish and ground provisions.