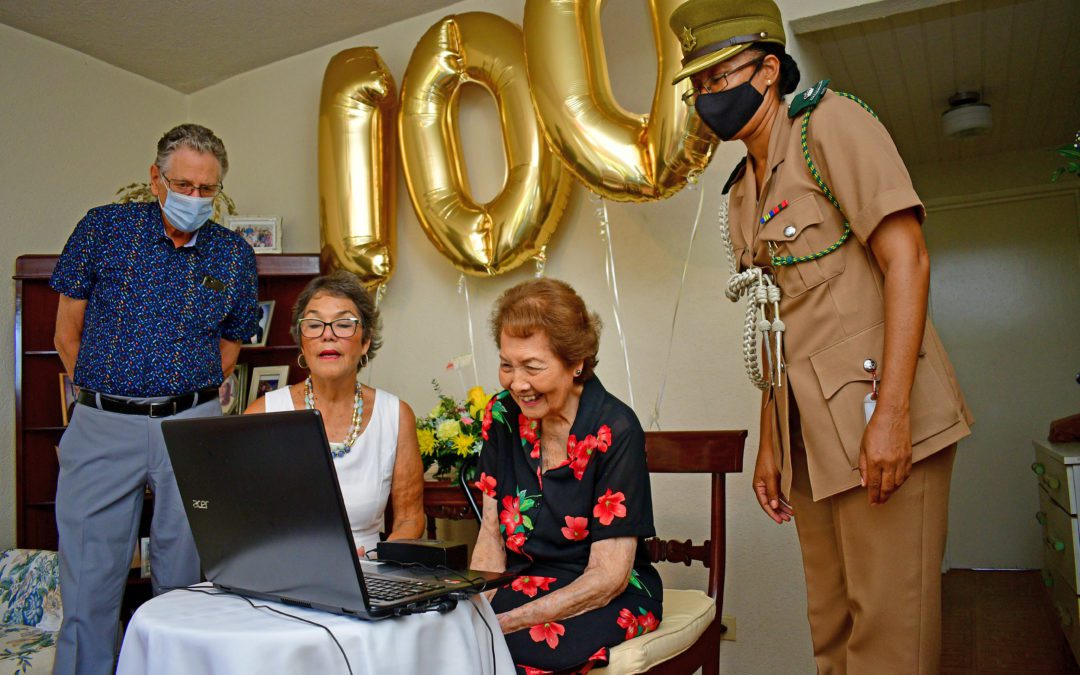 Leone Catherine Querino is not ashamed to proudly declare that she is independent and loving it!

The youthful centenarian with the charming smile an infectious laugh was the last centenarian to receive a virtual visit via Skype by the then Governor General, now President Her Excellency The Most Honourable Dame Sandra Mason.

One can see that in her early days, ‘LCQ’, as she is affectionately, called was quite the “fashionista”. As a hairdresser and the former owner of the Hut Boutique, travelled annually to France and Canada to stock her boutique.

During the virtual visit at her Maple Gardens apartment in Christ Church, recently, Leone told Dame Sandra she was very grateful and blessed to have so many people around her.

“Sometimes I don’t feel like I am 100 because I can still move around and I can still cook and wash and do things for myself.  I like to be busy. Sometimes I say “Oh don’t tell me that I reach 100 already and I don’t have any pains or anything.  I am very, very blessed and I get up every morning at 4:00 a.m. and pray to God to bless and protect me,” she said.

Leone’s eldest daughter, Sandra Murphy, age 75, said her mother, who is fluent in French, was born in Barbados but moved to Guadeloupe, where she received her education, at the age of eight. She reflected on her early childhood and described her mother as strict and reflected on the values she taught them.

“Those values stuck with us and I think that we have tried to pass them on to our children – the values of faith, family and boundaries are very important in life.

Leone met and later wed her Guyanese sweetheart, Agustus Marcellus Querino in Barbados on August 23, 1945, and later moved to Trinidad. She returned to Barbados in 1955.

The couple produced three daughters –Sandra Leone Querino-Murphy, Marcelyn Jacintha Querino-Racine and Annette Michelle-Jenson who all reside in Montreal, Canada. She is the proud grandmother of six and great grandmother of 11.

Although in excellent health, LCQ has excellent eyesight and a hearty appetite.