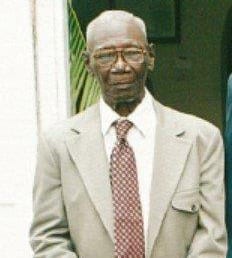 Martin Alleyne was a well-known chorister in the Anglican Church community.  As a young man, he learnt vocal (sol-fa) music and became an excellent sight reader.

He was a dedicated chorister whose rich bass voice made up part of the vocal complement of the choirs of St. George’s Parish Church and St. David’s Church.

He also thrilled parishioners when he played favourite hymns on the mouth organ.

Born in Dash Valley, St. George, Martin was raised by his maternal grandmother when his parents Milton and Drucilla Alleyne, emigrated to the United States of America.  He was educated at St. Barnabas School to seventh standard.

After leaving school, he learnt motor mechanics and was also taught to drive.  So enamoured was he with driving, Martin abandoned the apprenticeship and became a full-fledged chauffeur.

He worked as a chauffeur for most of his life.  He drove trucks for several plantations in St. George and Christ Church.  Martin also drove buses with private concessionaires and the Transport Board.  He was also a truck driver in the Public Works Department until his retirement at age 65.

Martin bought a taxi and continued driving the “highways and byways of Barbados” this time showing off Barbados to tourists eager to capture treasured memories of the island.  In 1952, Martin journeyed to the United States briefly to pick fruits under the Barbados/United States of America Farm Labour Programme.

He was married to Ena Forde from Monroe Road, Haggatt Hall, St. Michael who predeceased him after 65 years of marriage in 2005.  They had two children and were the grandparents of five and great grandparents of seven.

One of his favourite pastimes was playing cards especially whist.