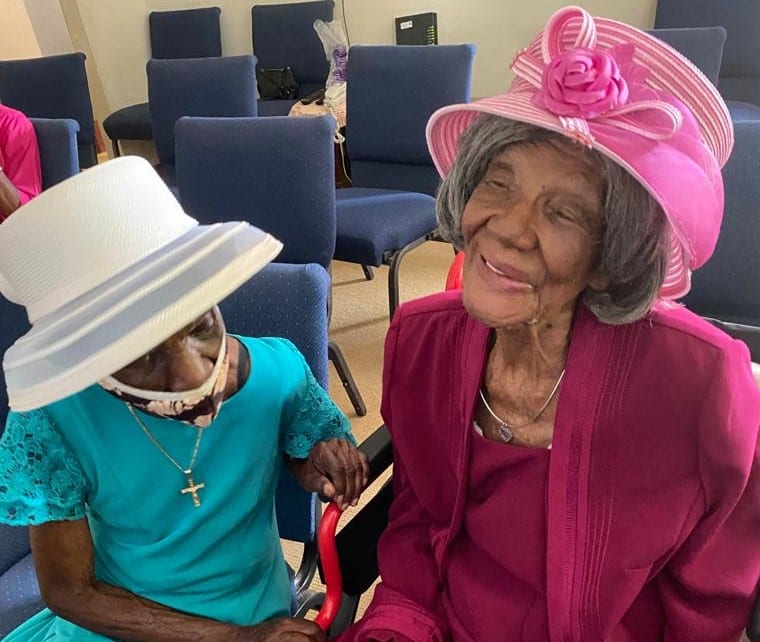 Neta Daniel stirred a “good cou cou” with marvelous results in her heyday.  She did not keep that culinary skill to herself, but shared it with her daughters and others willing to learn.

That skill and others were highlighted during her birthday celebrations at Belair No.1, St. George.  Surrounded by her 97-year-old sister, Doris Campbell; Reverend Lennox Wiggins of St. Helen’s Christian Mission and other family members, Mrs. Daniel gladly accepted a basket of flowers, a bottle of non-alcoholic wine and a birthday card from Governor General Dame Sandra Mason.

In offering congratulations to Mrs. Daniel, Dame Sandra expressed regret that she was unable to do in-person visits due to the COVID-19 pandemic.

Mrs. Daniel, elegantly decked out in a magenta skirt suit and matching hat, thanked God for her long life.  “It was God’s grace and mercy that brought me through. If you live close to the Lord and try to serve him, he will see you through.”

Mrs. Daniel was born in Chalky Mount, St. Andrew and was educated at the nearby Chalky Mount Mixed School.  She also resided at Joe’s River, St. Joseph.

On leaving school, she worked as a labourer at various plantation estates in the district.  She later met and wed Thaddeus Daniel, now deceased, in 1940.  That union produced 12 children, four are deceased.  They also had 21 grandchildren, 20 great-grandchildren and two great-great-grandchildren.

Son Chester Daniel said while spending time with his mother recently, he had a closer look at how she spent her time on this earth “during those 36,500 days”.

“There were times her recollection was clear and at times not so clear.  But I learned that she lived her life with purpose….  She left school at the age of 14 and worked hard to support her siblings and then later in life, her own children.”

Mrs. Daniel is a member of St. Helen’s Christian Mission Church and her hobbies include reading the bible, crochet and listening to religious programmes.