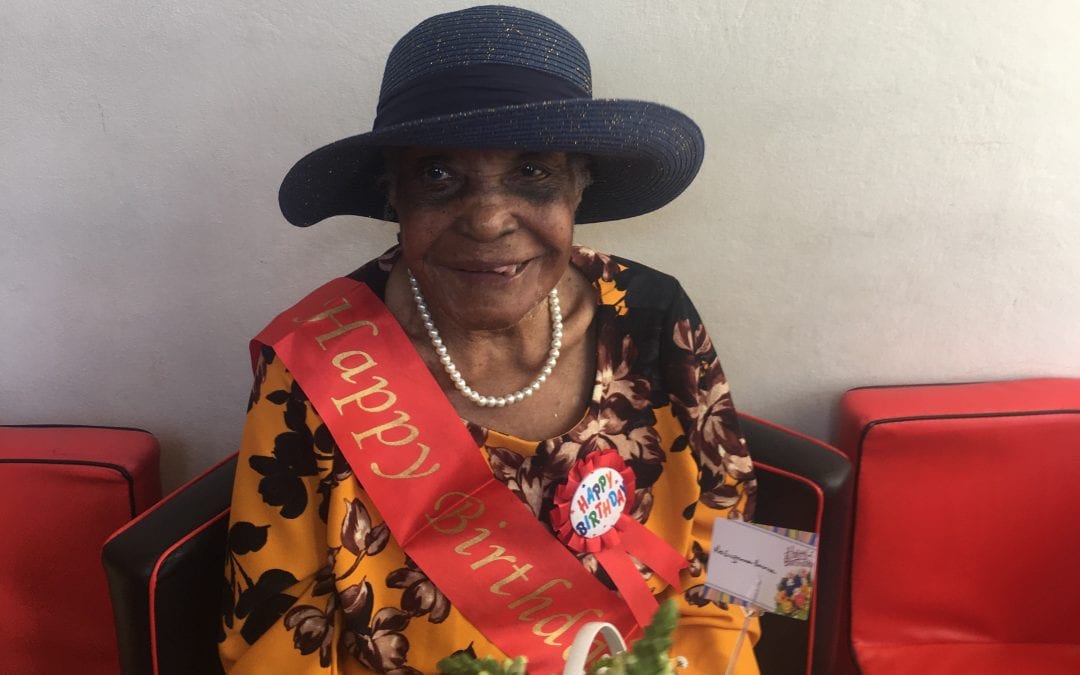 Suzanna Bourne was in a jubilant mood as she and family members sang the chorus Praise God to usher in her 100th birthday celebrations.

Governor General Dame Sandra Mason joined relatives via Skype as they toasted the matriarch and sang happy birthday at the home of her only daughter, Andrea Bourne-Best, where she currently resides at 3rd Avenue Richmond Gap, President Kennedy Drive, St. Michael.

Several well-wishers visited as she was presented with a basket of flowers and a bottle of non-alcoholic wine by the Governor General’s Aide-de-Camp, Major Julia Dabreo, to which the “birthday girl” responded: “Thank you very much.  May God bless you and I am glad to be able to say hello to you.  I feel so happy.”

Dame Sandra told Mrs. Bourne-Best to continue to take good care of her mother and to cherish her.  “You are lucky to still have your mother with you.  Continue to cherish her until such time.”

Born in St. Lucia, Mrs. Bourne lived in Castries and Soufriere before migrating to Barbados in the 1930s.

She met and later wed Samuel Bourne and resided at Maxwell Hill, Christ Church.  However, he died when Andrea was six years old and Suzanna was forced to take on the role of mother and father.

Andrea told Dame Sandra what it was like growing up as an only child. “It was mum and I.   She filled in for the siblings that I didn’t have.  Everywhere she went, she took me and she was really there for me.  I was a little lonely, but she always ensured that I got into my books.”

Granddaughter Lucia Bourne-Deterville credited her grandmother for her survival, as she was a fussy child who didn’t like to eat.  “If not for my grandmother literally spoon feeding me, I would not be alive.  She is the only one who had the patience to feed me, no matter how long it took for me to swallow the food and I love and treasure her.”

In her younger days, Mrs. Bourne worked as a housekeeper for private homes and the then Nurses’ Association located on Spry Street.  At the time, Eunice Gibson was the head of the Association, and today, the polyclinic located in Warrens bears her name.

As a devout Catholic, she previously worshipped at St. Dominic’s Roman Catholic Church, at Maxwell, Christ Church, and for the last five years at Our Lady Queen of the Universe Catholic Church, Black Rock, St. Michael.

Mrs. Bourne loved to make fudge, which she often packaged and gave away to relatives and friends in the community.

She likes to eat fish and plantain, and occasionally enjoys fast food. Mrs. Bourne has four grandchildren and four great-grandchildren.