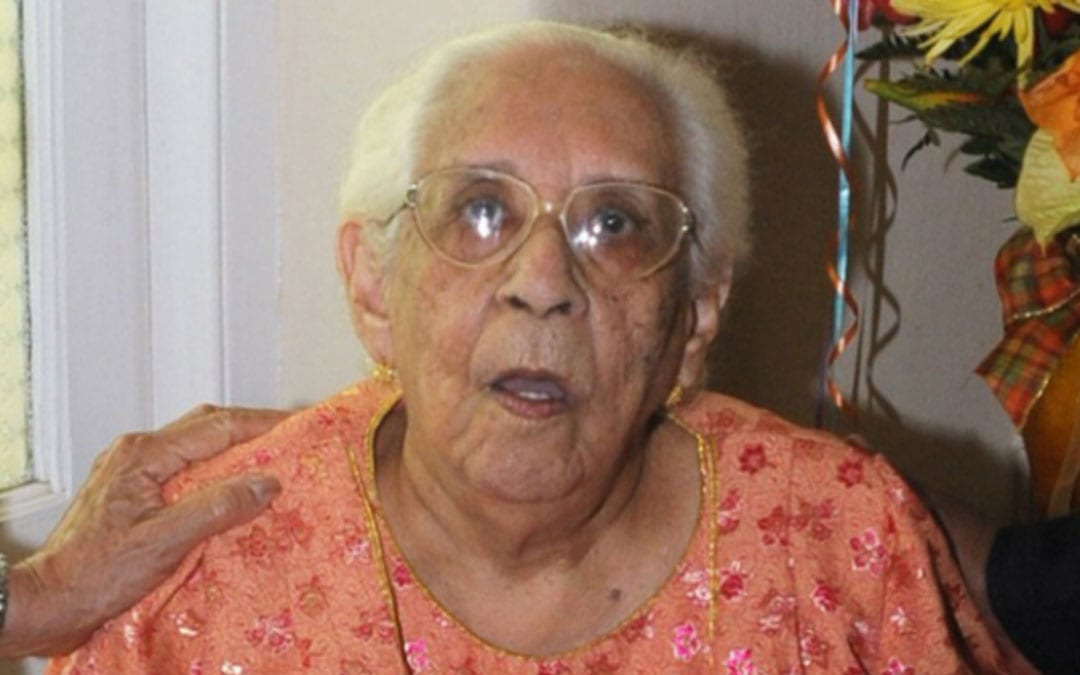 Baptized Angela Sylvia Browne but always referred to as Sylvia Angela, she was the second child of Stanley Browne, a seaman and Camilla Browne, a seamstress. She had one younger brother (Lester Browne) and one sister (Monica Elaine Wilkins). She also had two older sisters from her father’s previous marriage: Anne Ifill and Mary Hewitt.  All of her siblings are now deceased.

Her family lived on Martindale’s Road, from where she walked to school at the Ursuline Convent on Collymore Rock.

Sylvia had a strong faith in God and was a staunch Roman Catholic, continuing to go to church with her daughter up to just a few years before she died. After she could no longer attend church, members of her church community came to her home to pray for, and with her, and to give communion.

As a child, Sylvia always liked to take care of sick dogs or cats and had wanted to study to be a nurse, but her mother did not wish her to go away to study. In fact she acted as bedside nurse to her sister Monica Elaine who became seriously ill with Meningitis as a young adult, and when Elaine (as she was called) had to go to England for follow up medical care, Sylvia was praised by doctors abroad for her meticulous note keeping and care.  Elaine eventually recovered.

Sylvia married William Nathaniel Maughan (Nat) – druggist (pharmacist) – on July 3, 1943. They first lived in Bay Street near to where the Boat Yard is located.  Afterwards, they moved closer to town still on Bay Street on the corner of Parfit’s Alley, close to the swing bridge, in a building given to them by his grandfather Nathaniel Sealy.  They lived upstairs of ‘Nelson Pharmacy. Her 4 sons, John, (he died as an infant – cot death), Basil, Desmond and Raymond were born there. Her daughter Marcelle, the youngest, was born in Lands Ends just below Fontabelle, which was where the family moved to from the pharmacy building.

The family later moved to Rockley and remained there for 20 plus years, until her husband’s death. In 1989, she and her daughter moved to Garden Road, No.1, Worthing, where Sylvia lived with her daughter until her death. She was blessed with home care from loving and caring nurses/care-givers – Marjorie Ifill (main nurse) with part timers Pat Smith, Nello Marshall and Carolyn Foster.  We are sure their care, together with the love and care of her family, added to her longevity.

Sylvia learned to sew at a young age assisting her mother with sewing types of clothing. Together with her mum and sister, she made her own wedding dress and cake.  She was a homemaker/housewife who loved to cook and bake – this included Bajan dishes such as conkies, pudding and souse and she baked the Christmas black cake and all her children’s birthday cakes. She also made sea moss ‘jello’ and sorrel from scratch and her Christmas rum punch gave a big ‘punch’.  She loved to cook up a storm for family visiting from overseas who loved her flying fish and macaroni pie. She sewed all her clothes and daughter’s clothes, uniforms, curtains and drapes, cushions and couch covers.

On more than one occasion, when her husband needed assistance at the pharmacy, Sylvia would hang up her apron, go out to work and within a short time be instrumental in getting the business back on the road to recovery.  She was very thrifty.

Her favourite food was coucou and steamed fish, salt fish, red herring or mackerel; but if you wanted to see a smile on her face bring some melts, sea egg, or a breadfruit. She loved all types of ground provisions and in particular sweet potato and yam. She ate everything, and believed that in addition to her strong Christian beliefs, that it was her healthy appetite that had kept her alive all those years. She often too had a teaspoon of ‘brandy’ or ‘gin’ before lunch. This was introduced to both her and her husband by his grandfather.

Sylvia has four grandchildren and one adopted grandchild, who has two  daughters. Her only biological great grandchild, named after his two great grandfathers, Moses Nathaniel, was born on May 16, 2017. He visited his great grandmother on May 28, 2017 for the first and only time as Sylvia died eight days after this visit. The family has some lovely pictures, in memory of this visit.

Sylvia had a long, productive and happy life and will be greatly missed by her children and other family and friends