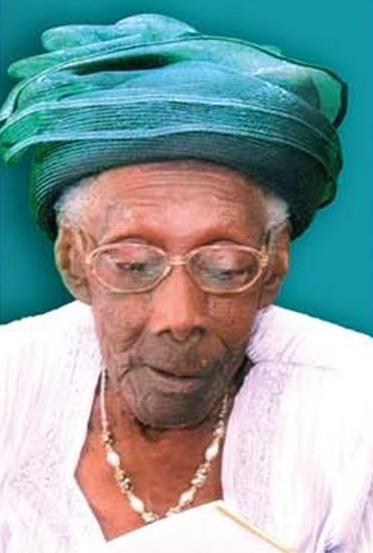 Vivian Ursula Blenman, born February 15, 1913 to parents Mildred and Joseph Blenman, resided in Licorish Village, My Lord’s Hill, St. Michael, for all of her 101 years.  Vivian was the eldest of seven children educated at the Belmont School and Carrington Village School.  She is the mother of two daughters, grandmother of five and great grandmother of one.

Her careers varied in an attempt to provide for her family. She cared for others through catering and bedside nursing.  She also worked as a maid at Courtesy Garage and as a machine operator at the Cotton Ginnery in Spencers, Christ Church. In her golden days, she picked up her tray and was self-employed as a vendor at the Belmont Primary School, where she sold her snacks enjoyed interacting with children daily.  This also encouraged her love for numbers; Vivian could add numbers at a drop of a hat, without the use of a calculator. This was seen as she also sold snacks and drinks from her home in her spare time.

Vivian loved when flying fish were plentiful. She could be seen sitting in the yard with her well sharpened knife, bucket of water, pan of fish and cutting board.  She would scale and bone a hundred fish and do so with expertise and skill.  Some of her favourite foods were cou cou and flying fish, ground provisions especially sweet potatoes, yams and eddoes, sea eggs, cow heal and linseed.  Her beverage of choice on mornings was green tea and afternoons cream soda or red Ju-c.  During the evening and before bed she would have a sip of  brandy.

Vivian was full of style and was known for her unique way of dressing – fantastic hats, her white hair always well groomed and tidy, a beautiful smile and a humble quiet demeanor.  This was seen especially as her Sundays, when she attended church. She was an avid member of the Belmont Methodist Church and worshipped there all her life.  She believed in prayer and sang well known hymns and choruses. Some of her other hobbies and past times were playing the organ and violin, baking and cooking.

She was a well-known and loved by all who came into contact with her; particularly those who she interacted with in her 80’s, when she became a member of the Israel Lovell Foundation Senior Citizens Club. There she met with a group of ladies of a similar age twice a week. They would make craft items out of beads and wool, sing songs and sing songs. Once a year, they would take a trip to a different Caribbean island.  At Christmas time, they would go around to houses in the community and sing carols.

Unfortunately, around the age of 98, she made the difficult choice to remain at home as the distance to the Israel Lovell Foundation became too much for her legs. Still having all of her mental faculties, she would venture outside to chat with the youth after breakfast.  From a young age she was never a person to sit in the house, be idle or watch television.  On mornings, she would wash up, get dressed, get breakfast then go outside under the tamarind tree around the corner and lime with the younger folk. This was her way of interacting and keeping in good spirits.  Later in the day, she would go home, have her lunch, followed by a nap, then return to the tamarind tree to continue her chats.  The younger folk enjoyed her company and listened to her advice. They looked out for her in many ways as they affectionately called her, “village mum”.

At the age of 100, just two days before her 101st birthday, she made a sudden turn and fell off her bed, which resulted in a fracture to her hip. This did not dampen her spirit; she kept strong and celebrated her 101st birthday in the Queen Elizabeth Hospital, with a small party of family, friends, patients and nurses.  On March 26, 2014, she succumbed to her injury.

Vivian Blenman was an extraordinary lady who left behind many values and memories.  She is surely an icon for many. She met and shaped many lives.